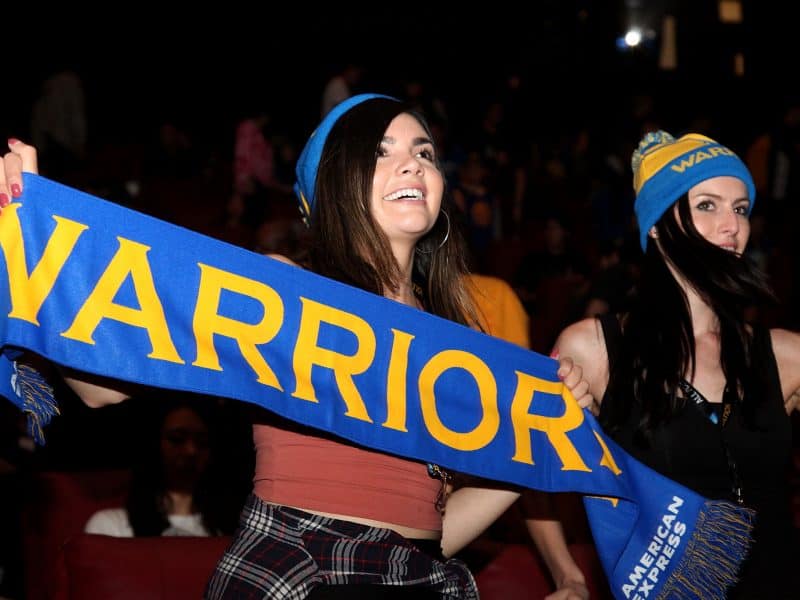 "NEWARK, CALIFORNIA - APRIL 07: Fans show their excitement as the Golden State Warriors take on the San Antonio Spurs during the American Express Dub Nation To The IMAX: The First Ever Live Streamed Sporting Event at the AMC Newpark 12 at the NewPark Mall on April 7, 2016 in Newark, California. (Photo by Kelly Sullivan/Getty Images for American Express)"

Want to be a champion in your small business? Take a lesson from the astonishing Golden State Warriors. These three-point dunking basketball phenoms, headed by the eminently-likeable Stephen Curry and Klay Thompson, have just made sports history, beating the single-season NBA wins set by Michael Jordan and the 1996 Chicago Bulls.

It’s not just on the court where these winning Warriors can teach entrepreneurs a thing or two. It’s also in their use of technology to build relationships with customers and run a highly-profitable business.

Recently in San Francisco, American Express convened a panel on what small business can learn about technology from the Warriors. In addition to a Warriors representative, the panel included small business owner, Steve Sarver, founder and CEO of the San Francisco Soup Company and tech entrepreneur, Kevin Anderson, co-founder of Appetize, an app enabling fans at sporting events to order food without leaving their seats. The panel was moderated by Gunther Bright, EVP and General Manager of Merchant Services at American Express.

It’s no surprise that Oakland-based Warriors are leaders in using technology being headquartered in the San Francisco Bay Area.

“Where we are geographically, technology is a natural extension of the Warriors,” said Daniel Brusilovsky, Digital Initiatives Lead of the Warriors. “Our customers are tech savvy. Our fans expect us to embrace technology. At Lakers games you see Jack Nicholson sitting courtside. At our games, you see tech celebrities.”

What can small businesses learn from an operation like the Warriors? Remember the Warriors are not just a team, they also manage the business-side of owning a team, selling merchandise and running a stadium.

“The stadium can only hold 19,500 people, said Brusilovsky. “How do we use technology to bring our experience to millions?” The owners of the Warriors come from the technology and venture capital world. “Technology is part of everything we do,” Brusilovsky explained.

Technology also plays a major role in how Sarver built the San Francisco Soup Company into a 16-location Bay Area favorite. “It’s not about what I can do with technology, it’s what can I do for my customer,” he said, emphasizing that small business people must be responsive to how customers’ use of technology changes.

When Sarver started, customers would telephone asking about the daily soups. So he started a fax distribution list. When email took root, he switched to direct email, bunching emails 50 at a time. As technology improved, he started an email newsletter. Then a website. “You have to figure out what the customer wants and provide it.”

Recently Sarver adopted an app, Punchh, to manage their loyalty program. “We got tired of customers slowing down the line as they searched for their (physical) loyalty card. Five years ago, not enough of our customers were using smart phones to use this, but now they are.”

Anderson emphasized that businesses focus on simple experiences with technology. “At first we tried to be all things…We learned to focus on just our core functionality.” Another tip from Anderson: “Finding the right technology partner is key. You want to know they are reputable, have clients like you, are going to stick around.”

Brusilovsky echoed the need for simplicity and trying out new technologies on a subset of customers. “You don’t have to go big from day one. Keep it simple, roll it out slowly.”

“Technology is about solving not only pain points but also giving customers differentiated experiences, connecting with your customers and prospects,” said Amex’s Bright. “The key is figuring out ways to delight your customers the way the Warriors have.”

When asked what’s next on the technology horizon that small businesses should be aware of, panelists agreed: new forms of customers making payments.

What’s the small business take-away from the Warriors panel:

This article originally ran in USA Today on April 15, 2016

7 Things to Stop Doing in Your Business
Next Post: Bookstores Show Small Biz How It’s Done